When you think of UNOs, you probably think “deep dish pizza,” not “healthy restaurant.” Right?

And while UNOs deep dish is still delicious, they have totally revamped casual dining by adding a TON of healthy, nutritious and really flavorful options to their menus nationwide.

I had the pleasure of visiting one of their restaurants this weekend and after experiencing their “nutritious and delicious” menu options for myself, and I have to say: I was impressed. They even have a healthier option for deep dish that tastes great! 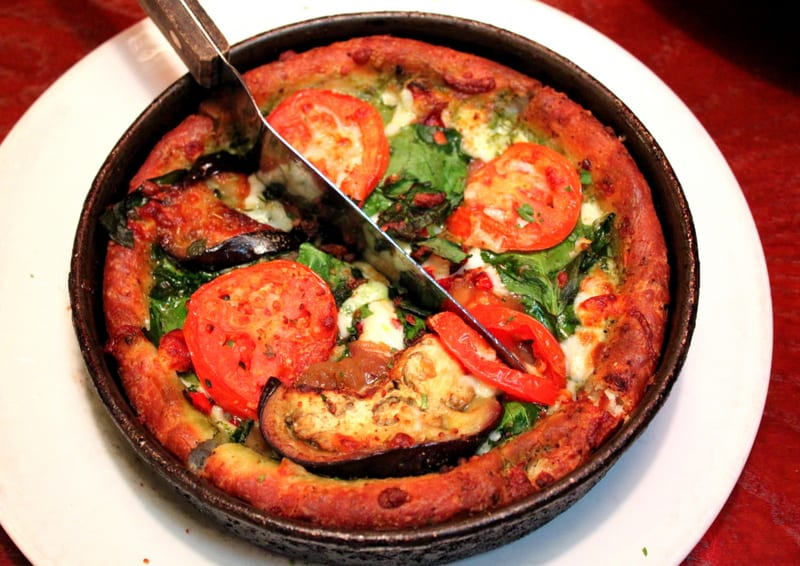 Initially, when UNOs first contacted me with an offer to taste their healthy options at one of their restaurants, I was slightly skeptical. After all, most casual dining restaurants that claim to be healthy have one token “wheat crust” or pseudo-healthy-but-not-really-tasty option (like a bland salad). But after speaking to their executive chef, Chris Gotto, and trying a bunch of their healthy options, I’m a believer.

UNOs is really making an honest, genuine effort to create food that’s actually good for its customers. They completely transformed their menu, and started the process of doing so in 2005. They train all of their waiters extensively on the different healthy options available so that the waiters can educate their customers. They call it “nutritious and delicious,” and it is.

It’s not surprising that Health Magazine recognized UNOs as the healthiest chain restaurant in America in 2008 – I think they probably still are in 2012!

When I spoke to Chris Gotto, the executive chef at UNOs, he said a few things that really resonated with me:

Now, keep in mind, everything on their menu isn’t healthy. But everything they do have is made with really high quality ingredients, and there are plenty of better-for-you options that still give you the pizza parlor experience without having to ruin your diet.
. 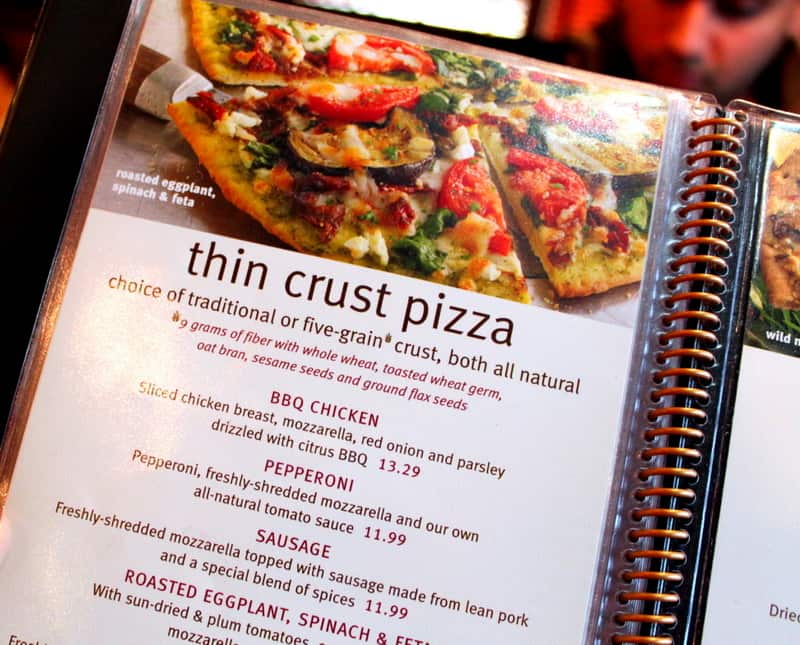 So what was my dining experience like at UNOs? It was great! First off, everyone there is extremely nice. I felt like I was in the midwest honestly – the restaurant has a really wholesome, family feel. The husband was SO happy to be eating deep dish at UNOs – since he’s from Chicago it was like going back to his roots.

When we arrived, we were greeted by our waiter, Matt, who was really easy going and cool. 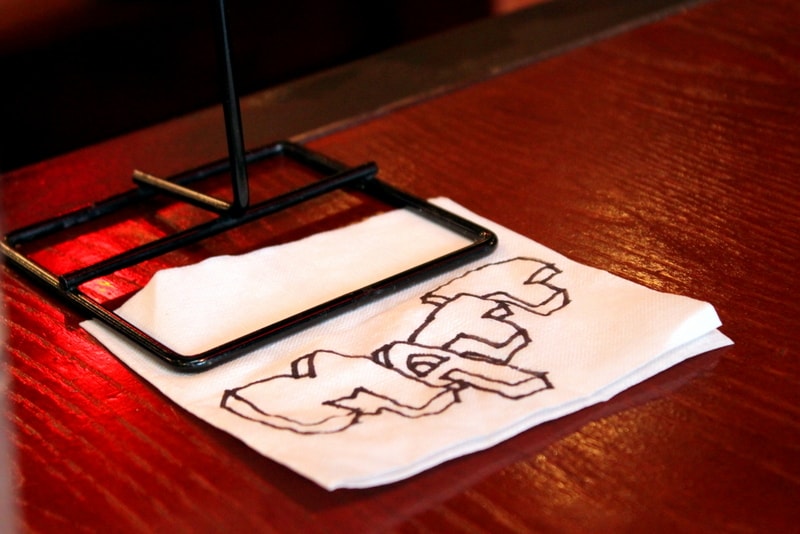 Then we chatted a bit with the team: Bruce Hoffman, the director of franchise operations; Matt Pellouchoud, the owner of the Antioch UNOs, and Jackie Christensen, the GM of the Antioch UNOs. They were great and answered all of my questions about the menu.

We started with the Low Fat Veggie Soup, which has 135 calories, 4.5g fiber, and 6g protein. 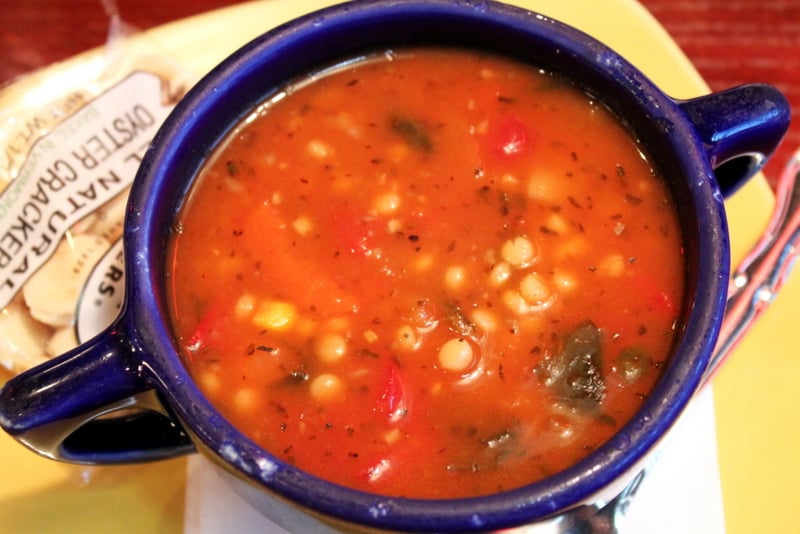 I really enjoyed this soup: it was hearty and flavorful. And the husband who doesn’t usually like plain veggie soups, loved it!

Next up: The Mediterranean Thin Crust Half Pizza with a 5 grain crust, spinach, plum tomatoes, kalamata olives, pesto, feta and Parmesan, and topped with chopped basil. 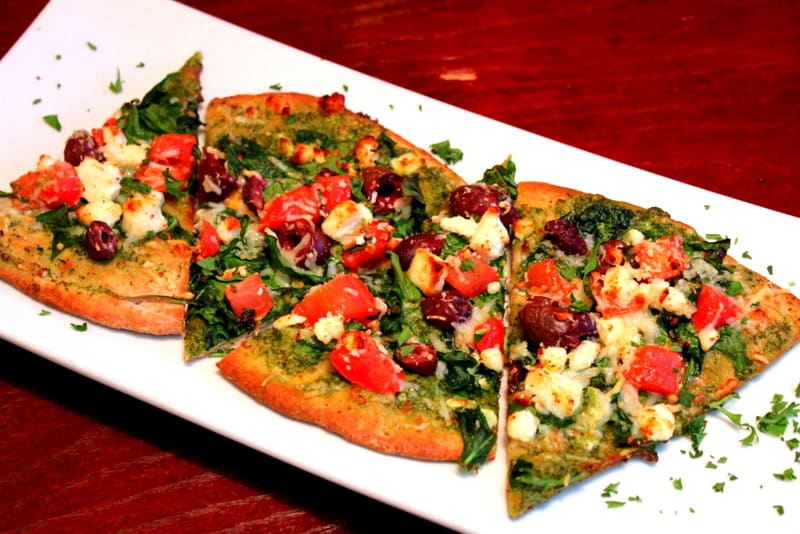 What I liked about this pizza was that they didn’t pile on the pesto (like most pizza joints would) – there wasn’t an excess of anything (like the sauce or cheese), and the crust really was thin and whole grain. One half-pizza was 450 calories, had 6g fiber and 21g protein. It is slightly high in fat (24g), but the calories are still low which is great. And I was surprised because it tasted amazing! It felt like something I’d get at a high-end pizza place, but this was actually low in calories and relatively healthy. 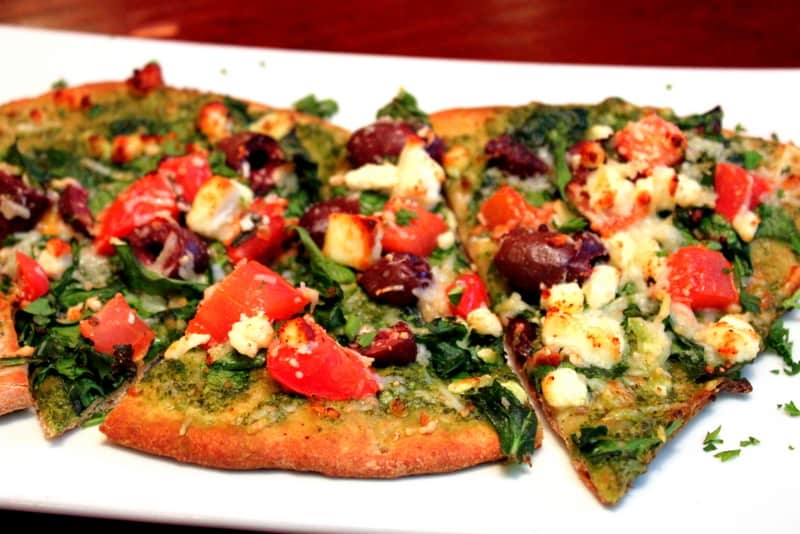 We also tried the Chopped Power salad, made with spinach, plum tomatoes, carrots, feta, red grapes, goji berries, Thompson raisins, soy nuts, almonds, pepitas, dried cranberries, and served with a 30-calorie fat free vinaigrette. It’s also made with chicken, but we got it without chicken. 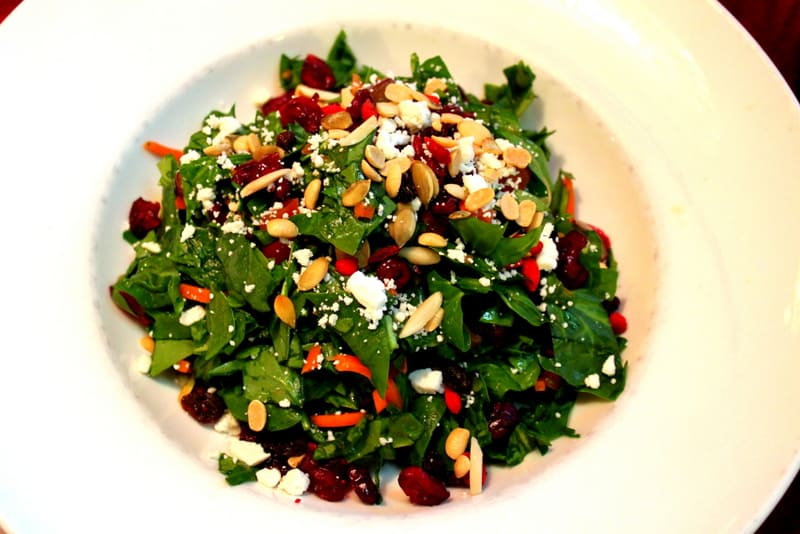 Yes, this salad had goji berries in it! And the best part: it wasn’t overdressed at all. It was just slightly moist, and you could really taste the freshness of the ingredients. This HUGE salad (it’s really a meal) – has 500 calories (including the chicken), 10g fiber, and with the chicken – 40g protein. I couldn’t believe it when the husband said that he would order this salad again – he’s not usually a salad person. 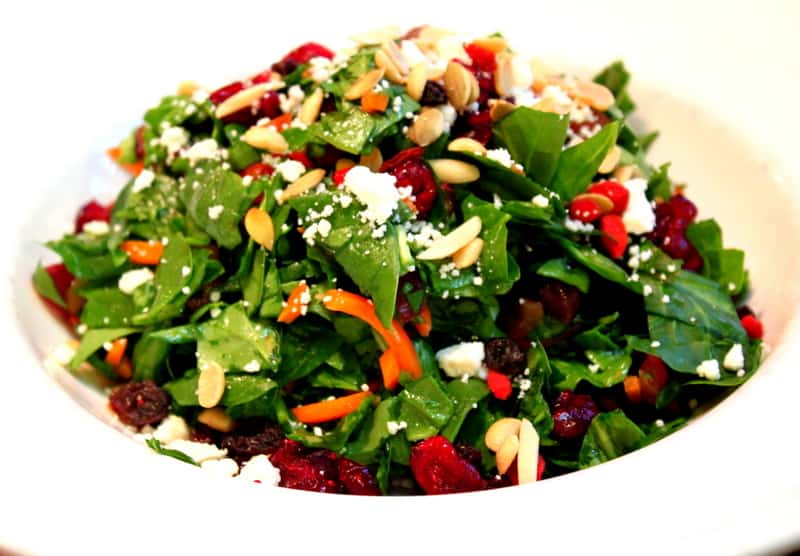 These three appetizers were amazing. They were like something I would make at home, and I think the three are perfect for a healthy meal at UNOs. Of course, we couldn’t leave without ordering some deep dish pizza.

It was what the husband had been waiting for all night!

And I had to see what their 9 grain deep dish crust was like. So we ordered two pizzas. 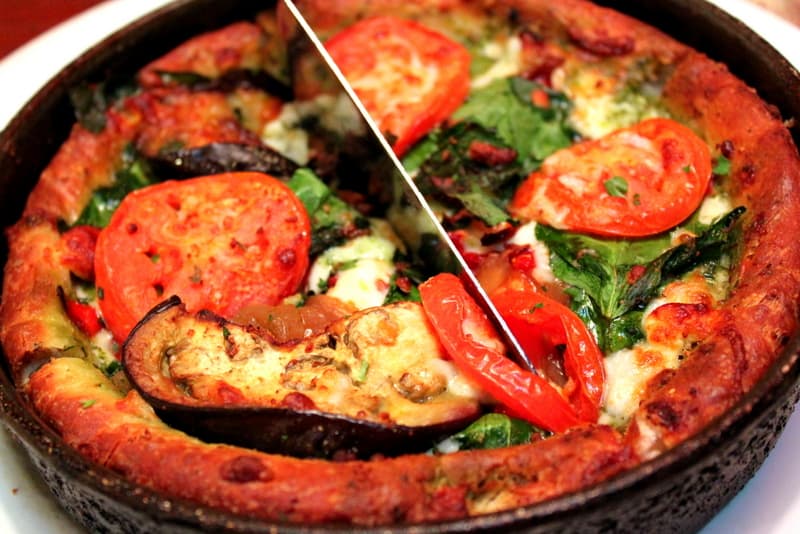 We got the personal size, because we were trying two pizzas. 1/4 of the personal pizza has about 350 calories, 3g fiber, and 13g protein. Obviously if you ate the whole deep dish personal pizza, that would be way too many calories. But if you stick to a smaller portion, you can indulge in a much healthier deep dish!

I really enjoyed this pizza – it didn’t have too much cheese (like most deep dishes), and I even found flax seeds in my 9 grain crust – they weren’t kidding with the “9 whole grains”! The husband said that the 9 grain crust was “chewier” than the deep dish crusts he was used to – and my response was “that’s because you have to actually chew the whole grains they put in it, they don’t just melt in your mouth.” The husband said that made sense, and he gave this pizza his stamp of approval.

Then we had to just try the less-healthy, traditional deep dish on a white flour crust. We ordered the Spinoccoli, with spinach, broccoli, tomatoes, feta, cheddar, mozzarella, and grated romano. 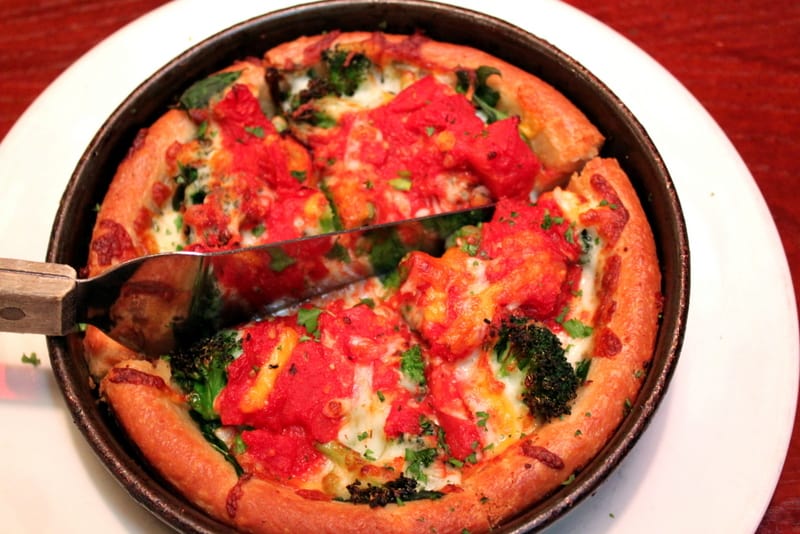 The husband said, “oh yeah, this is the deep dish from my childhood.”

And it was really delicious! Obviously, this is an indulgence. 1/4 of the pizza has 465 calories, 300 calories of which are from fat. So if you ate this whole pizza, you’d be eating over 1,800 calories (much too much!) But for an indulgence and in moderation, it was very, very tasty.

The husband was really happy. 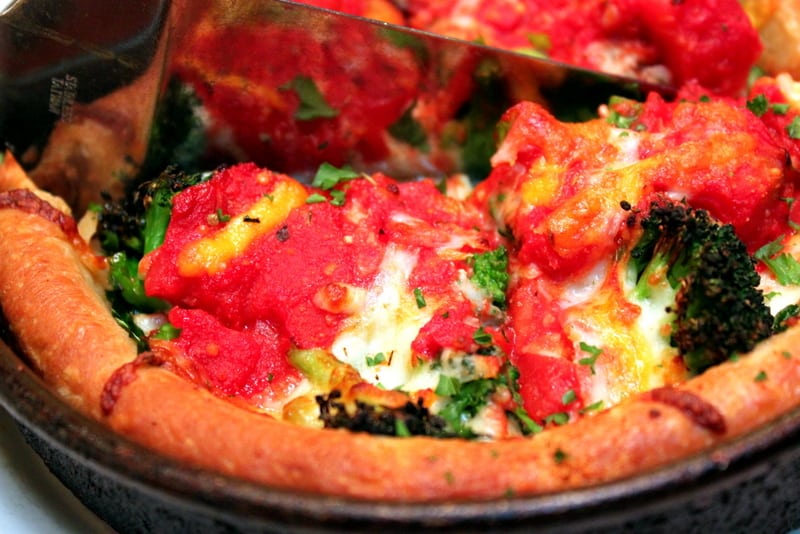 We also tried two of their sides, the farro salad, and their brown rice. 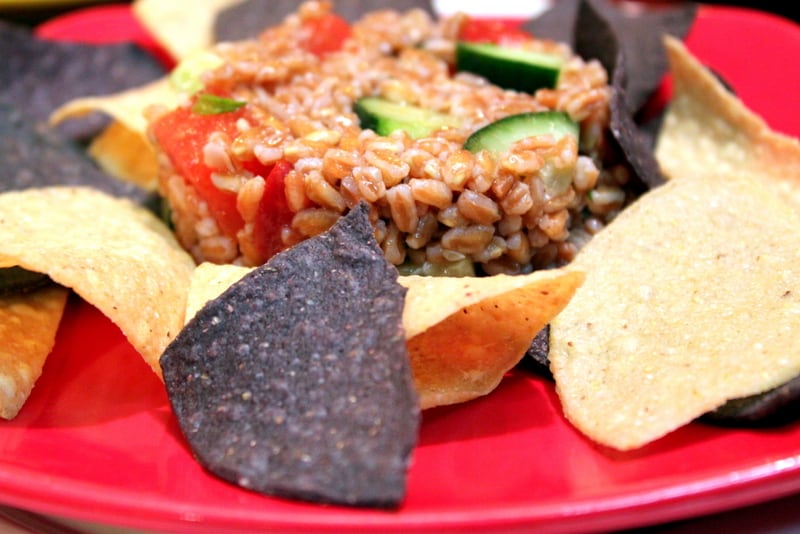 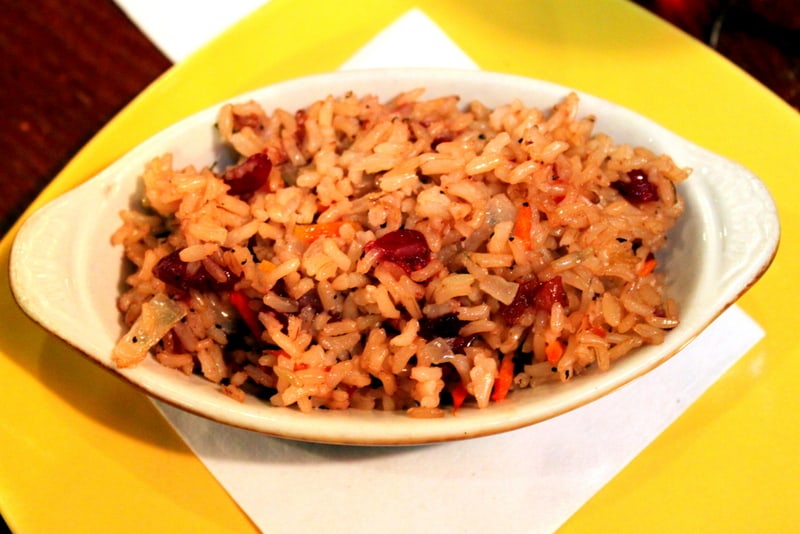 I liked the farro salad more than the husband did, and he liked the brown rice more than I did. But in both cases, I just appreciated that these sides were available. I mean – what chain restaurant has farro and brown rice as whole grain options on their menus? UNOs is definitely leading the way here.

In between dinner and dessert, I chatted a bit with Bruce and Matt about the challenges they’ve faced with selling some of the healthier options. Bruce mentioned that they had a whole wheat pasta primavera with tons of veggies, and that “it tasted so delicious, and we tried to push it so hard, but it just didn’t sell. For some reason, people just didn’t want to buy it – so we had to remove it from our menu and figure out how else we could make a healthy option that people would find appealing.” Chris Gotto also talked about the cost challenges of using organic ingredients (UNOs uses fresh ingredients, but they aren’t organic) – “organic is just too expensive so it’s not cost effective for us.” I can understand both of those challenges, and I don’t fault UNOs for it. I appreciate that they seem to be willing to take some risks and try out healthier options on their menus even if they don’t sell well – it tells me that they really care about the health of their consumers, versus just focused on profits and their bottom line.

At the end of our meal, Matt brought out their gluten-free bananas fosters dessert (only 350 calories for the mini size!) 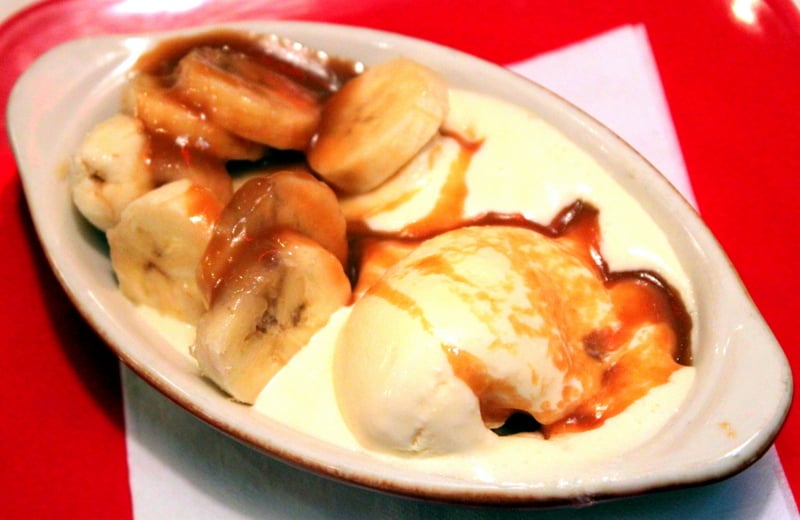 It was the perfect end to a perfect meal. Sweet, satisfying, and exactly the right portion for the husband and I to share.

I didn’t expect to be so unequivocally happy with my experience at UNOs, but I was! They truly are the healthiest chain restaurant that I’ve ever been to. And the team seems really committed to continually improving the menu and making additions that people will find to be tasty, delicious, but also good for them.

More restaurants need to do what UNOs is doing – it would be a big step in moving us all towards a healthier life. Thanks Bruce, Matt, and Jackie for an awesome experience this past weekend – it was so great meeting all of you!
. 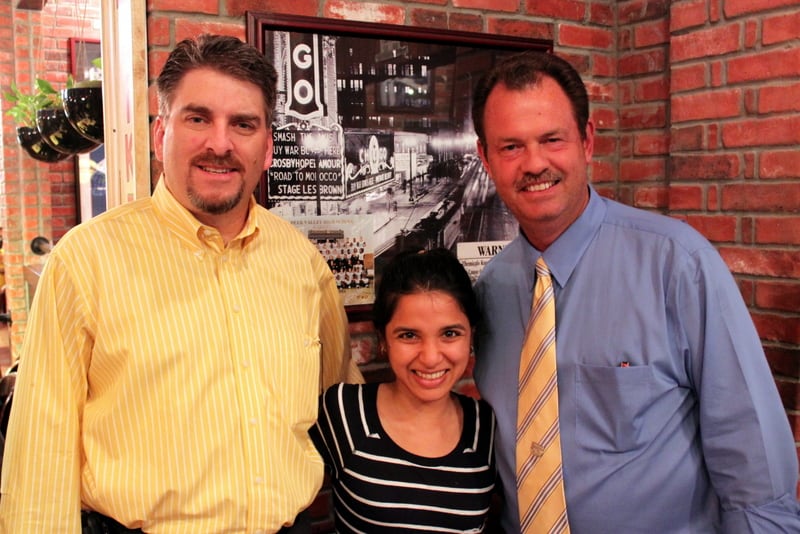