By Anjali Shah on November 18, 2021 · Last Updated on July 1, 2022
This post may contain affiliate links. As an Amazon Associate, I earn from qualifying purchases. Please read my disclosure.
Share This:
Jump to Recipe Jump to Video Print Recipe 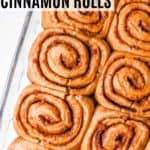 If you’ve been on the hunt for Healthy Cinnamon Rolls, you have come to the right place. This is the best ever ooey-gooey cinnamon roll recipe! Made with a few healthy swaps, these easy cinnamon rolls are lower in sugar and calories than traditional cinnamon rolls, and are a delicious recipe for breakfast or brunch, a holiday dessert, a special occasion, or a sweet treat with your tea or coffee anytime of the year!

There is nothing more traditional or classic than a hot, freshly made batch of homemade cinnamon rolls. The gooey texture of cinnamon buns, the perfectly balanced sweetness of the cinnamon sugar mixture, and the creamy icing make cinnamon rolls one of those treats that is pretty much irresistible.

But while most bakery cinnamon rolls taste amazing, they are packed with refined carbs and sugar – making them delicious but not healthy enough to enjoy on a regular basis!

Which is why I created the best healthy cinnamon rolls recipe you’ll ever find – one that has all of the flavor of the traditional version, but has half the calories and sugar of the original recipe!

These low calorie cinnamon rolls use a bunch of healthy swaps: whole wheat flour instead of refined flour, pumpkin puree to cut down on the amount of fat needed, and less sugar overall. While these are much healthier than the traditional version, they are fluffy, moist and super satisfying – and I guarantee your entire family will adore them!

This recipe calls for simple ingredients easily found in your pantry or your local grocery store! See below for detailed instructions and nutrition information.

For The Healthy Cinnamon Buns Dough

For The Delicious Filling

For The Healthy Cinnamon Roll Icing

🍁 How Do You Make Healthy Cinnamon Rolls?

Making a healthy cinnamon roll recipe is actually easier than you might think! As far as how healthy the recipe becomes, that all depends on how close you want it to taste to the traditional version, vs. a less sweet version.

I think this recipe is the perfect balance between a healthy cinnamon roll that still tastes amazing! While these cinnamon rolls aren’t entirely healthy, they are MUCH healthier than classic recipes. They are made with ingredients that are okay to eat in moderation. Let’s talk about what makes them healthier.

I guarantee, even with these healthy swaps, these will be the best cinnamon rolls you’ll ever make!

Activate yeast: In a small bowl add warm milk, sugar and sprinkle the yeast on top. Let it rise for 5 minutes.

Mix the wet ingredients: In a large mixing bowl combine the oil, egg, vanilla, pumpkin puree and mix until smooth and well combined. Pour in the milk with yeast and stir until combined.

Add the dry ingredients: Add the flour and spices to the wet ingredients and stir until incorporated.

Knead the flour mixture: Knead by hand or using a stand mixer with a dough hook attachment for 3-5 minutes until you have an elastic and smooth dough.

Form into a ball and place dough into a lightly greased large bowl. Cover with a kitchen towel and let it rise for 1 – 2 hours in a warm place until doubled in size.

Transfer the dough onto a floured work surface. With the help of a rolling pin, roll dough until you have a large rectangle – you’ll want it to be about a 14×16 inch rectangle.

Add the filling: Spread the butter on top and sprinkle with sugar, cinnamon and pumpkin spice. Roll the dough into a log shape and with a sharp knife (or serrated knife, or even a string of dental floss!), cut out 12 rolls.

Let the rolls rise: Place the rolls into a 9×13 inch baking dish and cover again. Let them rise for 30 minutes, then preheat your oven to 350 degrees F.

Bake: Take the rolls to the oven and bake for 20-30 minutes until golden brown on top.

Glaze and serve: To make the glaze mix the icing sugar with milk and vanilla. Top the cinnamon roll with glaze.

Let the glaze cool over the rolls for 2-3 minutes, then serve!

How Do You Store Cinnamon Rolls?

For best results, you will need to let the cinnamon rolls cool down completely. Once they have cooled all the way, place them inside of an airtight container. You can store them at room temperature for up to two days.

Before serving, I recommend tossing these healthy cinnamon rolls in the microwave for 10-15 seconds, or warming them in the toaster oven on low heat for a couple of minutes. That will help them to become warm and gooey just like they were when they came out of the oven.

Yes, you can freeze these easy healthy cinnamon rolls!

To Freeze Before Baking: While you can freeze the rolls after they have fully baked, I have found they turn out better if you freeze them after the first rise, roll and cut. Then, when you’re ready to bake them, remove them from the freezer and let them thaw in the fridge overnight, then let them rise on the countertop for 1 hour before baking.

To Freeze After Baking: Let the rolls cool completely. Then wrap each one in plastic wrap and put them in a freezer-safe bag or container. They will last up to 2 months in the freezer. Thaw in the fridge overnight before serving. You can also defrost them in the microwave if you want them warm.

What if my cinnamon roll dough is too sticky?

If your dough seems a bit too sticky, add a little bit of flour – 1 spoonful at a time – until the dough comes to more of a tacky texture (where it pulls away from the mixing bowl easily but isn’t too dry). But be careful not to add too much flour as that will result in tough, dry buns!

Unfortunately yes! For example, the classic Cinnabon cinnamon rolls have 880 calories each and 60 grams of sugar and 30 grams of fat. Our healthy cinnamon rolls recipe has 1/4 of the calories and fat, and 1/6 of the sugar – making it a much better option!

I love serving these healthy homemade cinnamon rolls as part of a bigger breakfast or brunch spread that includes pancakes, oatmeal, breakfast potatoes, and smoothies! But you can enjoy them with a simple cup of coffee, tea, hot chocolate, or just all on their own!

If you have tried this recipe, then please rate it and let me know how it turned out in the comments below! 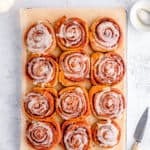 If you’ve been on the hunt for Healthy Cinnamon Rolls, you have come to the right place. This is the best ever ooey-gooey cinnamon roll recipe! Made with a few healthy swaps, these easy cinnamon rolls are lower in sugar and calories than traditional cinnamon rolls, and are a delicious recipe for breakfast or brunch, a holiday dessert, a special occasion, or a sweet treat with your tea or coffee anytime of the year!
Prep Time2 hrs 30 mins
Cook Time30 mins
Total Time3 hrs
Course: Breakfast, Brunch, Dessert
Cuisine: American
Diet: Gluten Free, Low Calorie, Low Fat, Vegan, Vegetarian
Servings: 12 cinnamon rolls
Calories: 232kcal
Author: Anjali Shah

For The Cinnamon Roll Dough