By Anjali Shah on June 25, 2021
This post may contain affiliate links. As an Amazon Associate, I earn from qualifying purchases. Please read my disclosure.
Share This:
Jump to Recipe Jump to Video Print Recipe 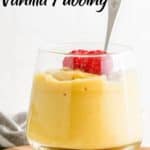 In the mood for a vanilla pudding cup? These days, this vegan dessert is the only thing I want to make! Rich in real vanilla flavors, this homemade vanilla pudding is suitable for any occasion and tastes delicious served with fresh berries on top. Way tastier than instant puddings, made without any dairy, this vegan vanilla pudding is made with simple ingredients that come together to make a super easy dessert that the whole family will love.

This irresistible, creamy vanilla pudding is low carb and suitable for all ages. Enjoy this pudding by itself or dress it up into a much more elegant dessert like Southern vegan banana pudding. There are tons of ways to customize this pudding recipe to fit your tastes. But no matter how you consume this delectable dessert – the most important thing is that you enjoy every bite!

This easy recipe is made with only minimal ingredients! You can find many of these main ingredients at your local grocery store or online. The full measurements are listed in the recipe card below!

Mix Ingredients: In a medium saucepan, whisk all the ingredients except for the vanilla extract.

Thicken & Add Vanilla: Bring the saucepan over the stove over medium heat. Whisk occasionally to prevent the pudding from sticking to the bottom of the pan. Once the pudding starts to bubble, steam for one to two minutes. Next, add the vanilla extract and combine.

Serve: Transfer the vanilla pudding in individual bowls or ramekins and allow it to cool. Alternatively, you can put the entire pudding in one container if you plan to store and serve it later.

Chill: Finally, place the pudding in the refrigerator for at least an hour to thicken. Optional: Serve this vegan pudding recipe with fresh strawberries, coconut cream, animal crackers, nilla wafers, or cookies.

Will pudding set if it’s made with almond milk?

Yes! As long as you have the thickening agent, you can use any plant milk and the pudding will still set in the refrigerator.

Although this vanilla pudding does contain refined sugar, you can easily make it healthier by just cutting the amount of sugar in half. By doing so, each serving will only have about 6-7 grams of sugar which is much healthier than any pudding you could make using a store-bought instant pudding mix!

The difference between these two puddings is that French vanilla pudding typically uses egg yolks for a richer flavor.

Yes, this type of Instant Pudding is vegan! Always be sure to read the ingredients on the label as not all instant puddings are vegan.

If you have tried this vegan vanilla pudding recipe, or any other recipe on my blog, then please rate it and let me know how it turned out in the comments below the recipe card! You can also FOLLOW ME on FACEBOOK, TWITTER,  INSTAGRAM and PINTEREST to see more delicious, healthy, family friendly food! 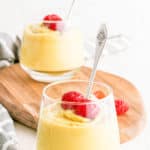 Indulge your sweet tooth with some of my lightened-up treats. From gluten-free brownies to fruity crumbles, there’s something for everyone.

Be sure to check out holiday favorites like my healthy pumpkin pie!