By Anjali Shah on April 19, 2019 · Last Updated on June 29, 2020
This post may contain affiliate links. Please read my disclosure.
Share This:
Jump to Recipe Print Recipe

These cheesy, loaded, vegetarian, late night nachos are super satisfying and ready in under 30 minutes! And the best part: they taste just like the traditional recipe but can be enjoyed completely guilt-free!

There is just something so satisfying about nachos. That gooey, cheesy goodness over crispy tortilla chips: it’s indulgent and tasty, the best type of late-night snack. But honestly, these nachos taste so good you’ll pretty much want them anytime of the day!

My husband absolutely loves nachos – but was super skeptical that I could actually make them healthy and still taste as good as the traditional recipe.

Enter: these loaded, late-night, vegetarian nachos. With a few simple swaps you’re able to enjoy a GIANT plate of nachos for only about 400 calories, 12g of filling fiber, and 22g of protein – with all of the richness of what nachos are all about!

Preheat oven to 350 degrees F. Line a baking sheet with foil. While the oven is preheating, heat the refried beans in a pot over medium heat. Stir in taco seasoning. Cook on low for 5 minutes until combined.

Once the beans are done, add corn chips to the baking sheet. Top with beans, onions, bell peppers, spinach and then cheese.

Remove from the oven and top with tomatoes and Greek Yogurt. Serve Warm.

Are Nachos with Cheese still healthy?

Absolutely! The key here is: how much cheese are you using? In this recipe, we only use 1/2 cup of cheese for two giant portions – which only amounts to about 200 calories total. If you’re using real, shredded cheese in moderation and are adding extra veggies and other high fiber, high nutrient ingredients (like beans) to your nachos – they are still healthy!

Do traditional nachos usually have beans?

Believe it or not, real authentic nachos are only made with tortilla chips, cheese and jalapeños. Adding beans and other toppings are considered a spinoff of the original. That said, I think these additions just make the original recipe even better! 🙂

Should you use nacho cheese instead of shredded cheese in this recipe?

I wouldn’t recommend it! Nacho cheese, technically, isn’t even considered a “food” by the FDA. It doesn’t meet their standards for real cheese! Plus, shredded cheese just melts so wonderfully over these nachos and makes them slightly crispier too. So, while ballparks and stadiums still use nacho cheese, I’d go with the original recipe on this one and stick to real, shredded cheese. It’s better for you, less processed, and much more satisfying!

Can you make these nachos vegan?

Yes! Just omit the cheese and greek yogurt and they are vegan-friendly!

Can you make these nachos gluten-free?

The good news is, they already are gluten free! As long as the corn chips you use aren’t made in a facility that also processes wheat, you should be good to go.

If you have tried this recipe for Guilt Free Late Night Nachos, or any other recipe on my blog, then please rate it and let me know how it turned out in the comments below! You can also FOLLOW ME on FACEBOOK, TWITTER, INSTAGRAM and PINTEREST to see more delicious, healthy, family friendly food! 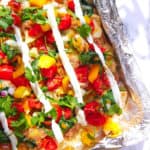 Appetizers are the perfect complement to my favorite entrees and dinner party menus. You can also make a small batch for a snack, or turn them into a complete meal.