By Anjali Shah on October 31, 2019 · Last Updated on March 25, 2021
This post may contain affiliate links. Please read my disclosure.
Share This:
Jump to Recipe Print Recipe 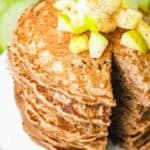 These perfectly sweet, apple cinnamon pancakes will remind you of an apple cider donut! Made with whole wheat flour, apple cider, warm spices and a fresh apple compote, this is a healthy, family-friendly breakfast that everyone will love!

When it’s fall, one of our family traditions is to visit an orchard, go apple picking, and get some warm apple cider and donuts. Last year, an orchard we visited made apple cider donuts and they were amazing!! I wanted to recreate those classic fall flavors in a pancake that I could serve for a holiday brunch or weekend treat. These apple cinnamon pancakes are filled with fall spices like cinnamon, nutmeg, cloves and ginger, and are lightly sweetened by … apple cider of course! They literally taste like an apple cider donut and are the perfect healthy, family friendly breakfast that everyone will enjoy.

How To Make Apple Cinnamon Pancakes – Step by Step

Step 1: In a bowl mix melted butter with brown sugar. Add eggs, vanilla extract and spices and beat to combine.

Step 2: Mix in apple cider and add whole wheat flour and baking powder. Mix until everything is well incorporated and there are no lumps left.

Step 3: Heat a skillet over medium heat. Pour a bit of oil to coat the surface, or use olive oil cooking spray. Pour around ⅓ Cup of batter and cook for 2 minutes or until bubbles form on top. Flip pancake and cook for 1 more minute. Remove from skillet and repeat the process with the rest of the batter.

Step 4: While the pancakes are cooking make the topping. In a small pot over medium heat mix apples with apple cider, maple syrup, vanilla and cinnamon.

Step 5: Cook the apple mixture for 8 minutes or until apples are soft. Top pancakes with poached apples.

Let’s face it, most flavored pancakes aren’t the healthiest for you thanks to the refined carbs and added sugars! These pancakes have all of the fluffy deliciousness of the traditional recipe, with these healthy swaps that make them better for you:

Absolutely! I haven’t met a kid who doesn’t like pancakes honestly, and the nice thing about these pancakes is that you can replace maple syrup with the fresh fruit compote for the topping – which makes them even more nutritious for little tummies!

What to Serve with Apple cinnamon Pancakes

Now obviously, you have to serve apple cider pancakes with apples! But one thing I like to do with pancakes is put out a “toppings bar” — so everyone can choose any combination of toppings they like. Some options that would work with these pancakes include:

How to make gluten free pancakes

You have two options to make gluten free pancakes. You can either use a 1:1 Gluten Free flour substitute like this one, or you can use gluten free oats, grind them into an oat flour using a food processor, and use that as a 1:1 substitution.

How to make these apple cinnamon pancakes vegan

To make these pancakes vegan you’ll have to make two substitutions:

If you have tried this Apple cinnamon Pancake recipe, or any other recipe on my blog, then please rate it and let me know how it turned out in the comments below! You can also FOLLOW ME on FACEBOOK, TWITTER, INSTAGRAM and PINTEREST to see more delicious, healthy, family friendly food! 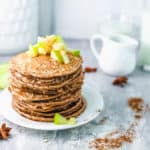 Top Tips for Making Apple Cinnamon Pancakes Nutrition facts are based on two regular eggs, water in the batter, and whole wheat flour