By Anjali Shah on May 27, 2020 · Last Updated on April 1, 2021
This post may contain affiliate links. Please read my disclosure.
Share This:
Jump to Recipe Print Recipe 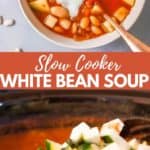 This slow cooker vegan white bean soup is loaded with veggies and a rich smoky flavor. It’s a hearty yet light, and an easy weeknight meal.

Spring and summer are here, and although I’ve moved more towards making lighter dishes, lately I have been craving a warm and veggie loaded soup.

Enter: This slow cooker vegan white bean soup. It’s a cross between a soup and chili with a rich smoky flavor that comes from the ancho chili peppers.

I absolutely love using my slow cooker to prepare dried beans and lentils. Using a variety of spices I have on hand, I ended up with a delicious smoky vegan white bean soup that’s packed with veggies, protein and deep spices.

And can I just tell you – the leftovers the next day were even more rich and flavorful. The perfect balance of heat from the ancho chilis, the freshness of the veggies, and sweetness from the tomatoes rounded out this meal. There is no reason to feel guilty after eating a huge bowl (or two!) of this recipe.

I topped it with a dollop of vegan sour cream and some chopped cilantro – but you can use any toppings you like: avocado, crushed tortilla chips – the possibilities are endless!

This makes a TON of food so it’s perfect for serving a large group of people. It also freezes great so you can always make a big batch and save some for later. My family loved this dish and said it even rivaled my “Best Vegetarian Chili” recipe!

How to Make Vegan White Soup – Step by Step

Step 6: Top chili with a dollop of vegan sour cream, cilantro, crushed corn chips, diced avocado – or anything you like!

My kids really enjoyed this soup. The recipe makes a ton, so we enjoyed eating it as left overs, and the kids gobbled it up. The key to making this kid friendly is cooling the spice. Adding a dollop of vegan sour cream, or topping with creamy avocado also helps to neutralize the spice.

There are also some concerns about using canned items due to BPA. However, you can find canned beans and other foods that are BPA free, and most canned items have now adopted BPA free liners.

Canned beans offer convenience, as they are already pre-cooked, and can reduce the overall cooking time of this soup from 7 hours to 4 hours.

What are ancho chiles?

This recipe calls for ancho chiles. Ancho chiles are sweet and smoky. It’s what gives this soup a rich depth of flavor. They are dark red, and wrinkled, with a mild heat.

What do you serve with Vegan White Bean Soup?

Check out these other vegan soup recipes!

If you have tried this Vegan White Bean Soup recipe, or any other recipe on my blog, then please rate it and let me know how it turned out in the comments below! You can also FOLLOW ME on FACEBOOK, TWITTER, INSTAGRAM and PINTEREST to see more delicious, healthy, family friendly food! 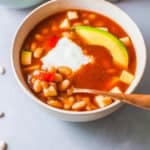 Soups can be hearty enough for a cozy winter meal, or fresh and light like my summery cucumber gazpacho. My family’s favorite option is the best vegetarian chili ever!

Whether you like your soups smooth or full of healthy chunks, my recipes will help you combine fresh, flavorful ingredients into a filling, balanced meal.