By Anjali Shah on August 19, 2020 · Last Updated on December 5, 2020
This post may contain affiliate links. Please read my disclosure.
Share This:
Jump to Recipe Jump to Video Print Recipe 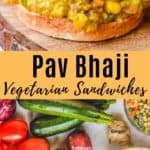 This Pav Bhaji is the perfect Indian inspired street food, but it has a healthy and nutritional twist that is insanely good. Munching on this Indian spiced vegetarian sloppy joe style sandwich will keep the entire family happy and makes for an easy dinner idea.

Ever since I was a kid, “Pav Bhaji” was pure comfort food for me. Typically, it’s a mix of mostly potatoes, a few peas/carrots, and Indian spices, served on a warm, toasted, buttered, fluffy white bun as kind of an open-faced sloppy joe. It’s like Indian street food, and it tastes delicious.

And while I do love the traditional version, it’s not the healthiest thing to eat on a regular basis. It’s basically refined carbs, regular carbs, and then more carbs, with a little bit of fat from the butter and cooking oil thrown in. There’s very little fiber and virtually no protein in the original so it doesn’t work as a filling meal. But it tastes SO good!

These vegetarian sloppy joes – or Pav Bhaji – look pretty similar to the traditional version, and taste the same, but have TONS of secret healthy add-ins that will keep you full, happy, and satisfied for hours.

What are the secrets?

Red lentils to start. When cooked down they become totally mushy and soft, and take on the flavor of anything they’re cooked with. Those little gems bring protein and fiber to the recipe and you won’t even notice them in the dish!

To add to that, I dumped in a bunch of veggies: cauliflower, zucchini, and mixed vegetables, in order to cut the potato-to-other-veggies-in-the-dish-ratio way down. There are still potatoes, just not as many as the traditional recipe would call for. And of course, all of the warm, aromatic Indian spices that you’d see in any self-respecting pav bhaji 🙂

Just 15 mins prep and 30 mins cook time, then you have a whole batch of pav bhaji ready to be served! I served it on a sprouted wheat burger bun for more protein and fiber, and to make it more like a veggie sloppy joe.

The result? An absolutely amazing, spicy, filling and fun dinner, that my whole family loved!

Most of the ingredients in this recipe are pretty straight forward. Just a few notes:

Step 1: Put the red lentils and water in a pot and bring to a boil. Reduce the heat to low and simmer until the lentils are softened, about 15 minutes.

Step 2: Cook the cauliflower, mixed vegetables, zucchini and potatoes in water until soft.

Step 3: When they’re soft, mash the vegetables well, in the liquid. Stir in the cooked lentils.

Step 4: Heat olive oil in a large skillet or pot over medium heat. Add the onions, ginger, garlic and tomatoes and cook until the onions have browned and the tomatoes start to break down (about 5-10 minutes). .

Step 5: Stir in the turmeric, Pav Bhaji masala and garam masala, cook for 30 more seconds. Add the mashed vegetables/lentil mixture, salt, and cayenne pepper to taste (if using). Cook on low for about 20 minutes.

What Makes This Pav Bhaji Healthy?

Yes, kids are going to love all the textures and flavors in this pav bhaji recipe. Because of the way that the pav bhaji is prepared they aren’t even going to notice that it happens to be packed with tons of healthy stuff. Serving it as a sandwich makes them naturally drawn to it and you may be able to get picky kids to dig in like crazy just because of this. If you do run into a kiddo that refuses, just give them a small amount and work up that amount each time you serve it. Once they get accustomed to the flavors and textures, odds are they are going to love it.

What is Pav Bhaji?

Pav bhaji is made up of two parts:
1) “Pav“: This is basically bread. In India, they use eggless, white flour dinner rolls – but you can use any dinner rolls or burger buns you like. I recommend sprouted wheat or whole wheat for added fiber – you can even serve it with sliced bread if you like!
2) “Bhaji“: This means “spiced vegetables.” The most common veggies used are potatoes, peas and carrots. This recipe adds in cauliflower, zucchini, and lentils. But you could add in butternut squash, other squashes, bell peppers or even sweet potatoes and those would all work well.

How Do You Store and Freeze Pav Bhaji?

To Store In the Fridge: Make sure the pav bhaji has cooled down completely, then transfer it to an airtight container. Don’t make the sandwiches before storing – store the pav (the burger buns) and the bhaji (the mashed veggie/lentil filling) separately. It will last up to 4 days in the fridge. I have found that the longer the pav bhaji sits, the more flavorful it becomes. Those spices get a chance to marry together beautifully and give you an even larger explosion of flavor!
To Freeze: Similar to storing in the fridge, the key is to freeze the buns and the filling separately. Always give the leftovers plenty of time to cool. Then place them in an airtight container. Once frozen, it will last 3 months in the freezer.
To Reheat: You can place the bhaji in a pot and warm it on the stove, or heat it in the microwave. Warm your buns in the toaster oven or regular oven before serving.

How Do You Serve Pav Bhaji?

Serve pav bhaji hot, with warm burger buns or rolls. For a bit of decadence, you can spread some butter on the dinner rolls before serving. You can also top your pav bhaji with chopped cilantro, diced red onions, crushed cashews, diced tomatoes, or a bit of lime juice for added flavor.

Can I Make Pav Bhaji Without Sprouted Wheat Burger Buns?

Yes, you can absolutely make pav bhaji without the sprouted wheat burger buns. That’s not a problem at all. Simply add it to a bowl or plate and dig in with a fork or dip your favorite bread into it.

You Don’t Want To Miss These Other Indian Recipes!

If you have tried this Pav Bhaji recipe or any other recipe on my blog, then please rate it and let me know how it turned out in the comments below! You can also FOLLOW ME on FACEBOOK, TWITTER, INSTAGRAM, and PINTEREST to see more delicious, healthy, family friendly food! 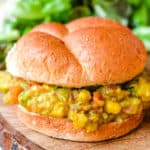 You won’t believe how flavorful these burgers can be! Help your budget and your belly with these affordable and nutritious burgers.